Christina Unkel Believes in the Power of Sports 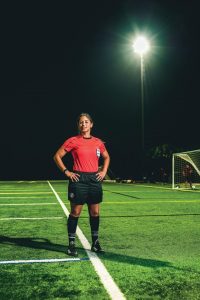 Christina Unkel was just 10 and already a veteran soccer player when she got her first paying gig refereeing Under 6 girls’ games in her native Cape Coral. (“Fifteen dollars a game and all the free concession food I could eat,” she says.)

Now 31 and an attorney with Maglio, Christopher & Toale, P.A. in Sarasota, where she negotiates contracts and sponsorship deals for professional female coaches and athletes across the U.S., Unkel is breaking ground again.

She is one of only three FIFA-licensed female referees who represent the UnitedStates Soccer Federation in the U.S., Canada and across South America and the Caribbean, and even as far away as China at the Nanjing Youth Olympic Games. Unkel refs men’s and women’s games, she’s a video referee for Major League Soccer, and this summer she starts a new role at FOX Sports as a TV analyst at the FIFA Women’s World Cup in France.

In a busy couple of weeks this spring, Unkel refereed soccer games in Montreal and Kansas City, and traveled to Chicago to speak at a leadership development conference for women in the workplace presented by the nonprofit Abby Wambach Wolfpack Endeavor. (Wambach is the two-time Olympic gold medal soccer player and FIFA World Cup champion who has scored more goals than any player in the world, male or female.) “Let’s do this!” Unkel told us. “Women empowering women, on the field and in the corporate world!”

And, as president-elect of its all-volunteer board, she finds time to advocate for the international Women’s Sports Museum—the first museum dedicated to women in sports—that she hopes will break ground in the Sarasota area sometime in the next several years.

Phase 1, a traveling pop-up museum exhibit, debuted at the NCAA Women’s Final Four tourney in Tampa this spring; Phase 2, a preview center, is set to open by summer 2020; and a Phase 3 capital campaign has a timeline of three to five years.

Unkel and her husband, Ted, a professional FIFA referee, have a 3-year-old

daughter who’s already out on the soccer field. (“The only way we do it is my parents, our rock and our foundation,” she says.)

“I want my story told so other people can see it and believe it,” says Unkel. “I believe in the power of sports. At the end of the day it’s taught me so many intangible skills.”