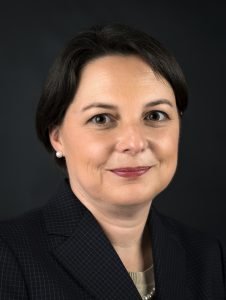 Allison Archbold found an unusual way to get over the “stage fright” she experienced before moot court and mock trials in law school.  She attended U.S. Marine Corps Officer Candidates School (OCS) for 10 weeks during the summer between her 2L and 3L year.  After surviving what she still ranks as the worst experience of her life, her attitude before mock trials her 3L year became “What is the worst that they cando to me?  Yell at me?  That has already been done.”  Undeterred by her miserable summer at OCS, she still reported to Quantico for active duty after passing the bar exam and served as a judge advocate for almost nine years, attaining the rank of major, before obtaining her LL.M. and coming to Sarasota to practice wills, trusts and estates.

She says that most people would be surprised to discover that being a lawyer in the U.S. Marine Corps is much safer overall than being a lawyer in the civilian sector.  To succeed as a lawyer in the civilian sector, a lawyer must only excel at her job and complete CLE.  No one cares about her health.  Time away from the office to exercise or attend medical appointments is discouraged.  She must pay to join a gym.  To succeed in the Marine Corps, a lawyer must excel at her job, complete professional military education (the equivalent of CLE for Marine Corps officers), and keep physically fit.  Marines must take a physical fitness test and weigh in twice a year, forcing them to maintain their fitness level.  Marine Corps law offices have group physical training, allow 1.5 hours for lunch to give lawyers time to eat and exercise, and treat medical appointments as mandatory work assignments.  Moreover, every base has free exercise facilities.  Although Marine Corps lawyers can be exposed to danger in combat and training exercises, they are far less likely to have to battle the civilian lawyers’ enemies — heart disease and diabetes.

Her belief in the importance of lawyers being mindful of their health is what motivated her to co-chair the Sarasota County Bar Association’s Health and Wellness Subcommittee.  At noon on Monday, March 25th at Michael’s on East, the Health and Wellness Subcommittee and FAWL are co-sponsoring “A Prescription to Save Your Life” to inspire lawyers to pay attention to their health and to give them some tools to do so.  The speaker, Dr. Chippy Nalluri, a local cardiologist who has treated many local judges and lawyers, is a highly sought-after speaker.  Her talks are known for being not only educational, but also inspirational and entertaining.

It is too late for most of us to join the Marine Corps, but it doesn’t mean that we can’t embrace the Marine Corps’ emphasis on physical fitness in our own lives.  The lives we save may be our own.